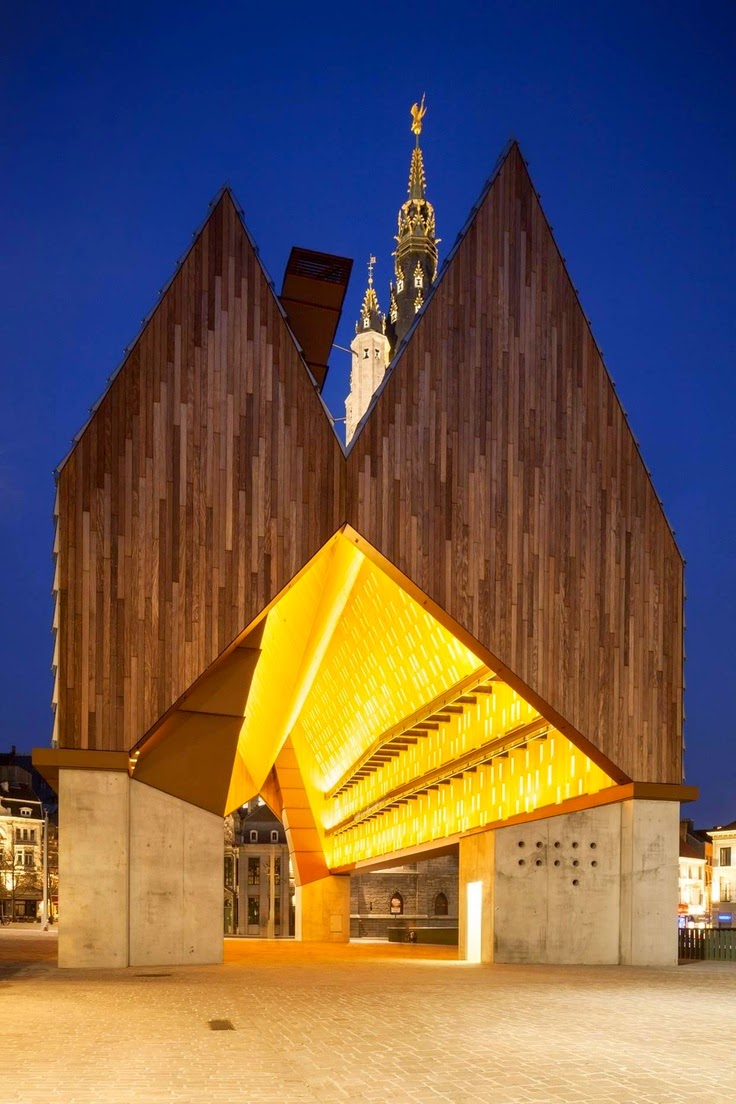 In 1996, the municipal authorities made a call for projects in a competition with a view to reforming the esplanade and constructing an underground car park. Convinced that more facilities for private vehicles was the last thing the old centre of Ghent needed, one of the teams went against the competition requirements and suggested an alternative project, the “Stadshal”, a large public porch which would restore volume to the block where the houses had been demolished, and the lost dimensions of the three squares. The project was disqualified but, a year later, the original plan of building an underground car park was rejected by the citizens in a referendum. The esplanade remained intact for another ten years after which the City Council once again called for projects in another competition with the aim of reforming it. This time, the “Stadshal”, now updated and complemented with a proposal for improving public transport around the space, was the winner. 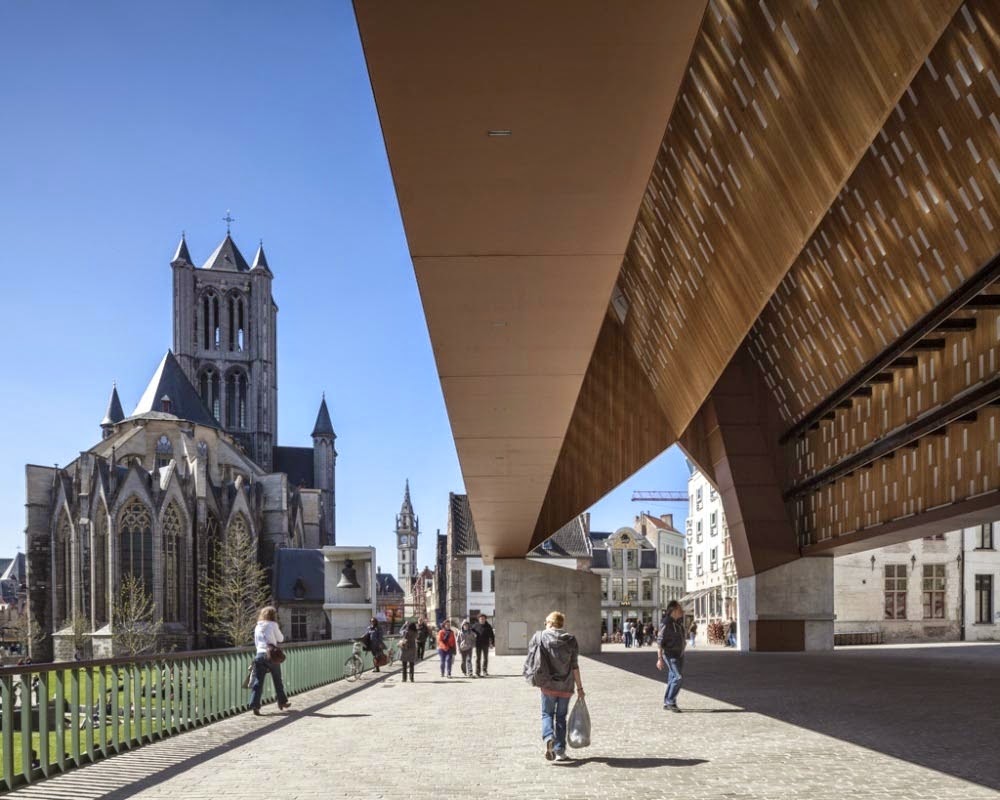 The “Stadshal” is an open porch which protects pedestrians from rain and sun. Highly representative in its architecture, it is also used as a shelter for concerts, gatherings and weekly markets. The ground beneath the cover of the porch is at the same level as the Poeljemarkt and the Goudenleeuwplein and is paved with the same cobblestones. The southern side, however, is closed off with railings and overlooks the gardens in Emile Braun square, which is slightly lower. This change of level lets daylight into the semi-basement, which houses public facilities, a bicycle parking station and a cafeteria. 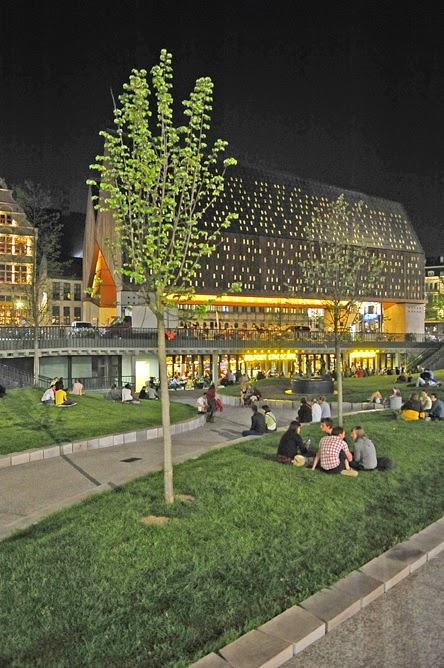 The porch is forty metres long and its height is halfway between that of the Town Hall and of the nearby constructions. It has two parallel very steeply sloping pitched roofs resembling those of the surrounding gothic buildings. These are made of wooden panels covered with glass shingles and they are pierced with one thousand six hundred skylights to let in the daylight while, at night, they function as a large lantern sending light outwards. The two roofs rest on four solid piers set at the corners of the building. Two of these contain fireplaces in which big fires can be lit at ground level. The other two contain lifts and steps going down to the semi-basement. 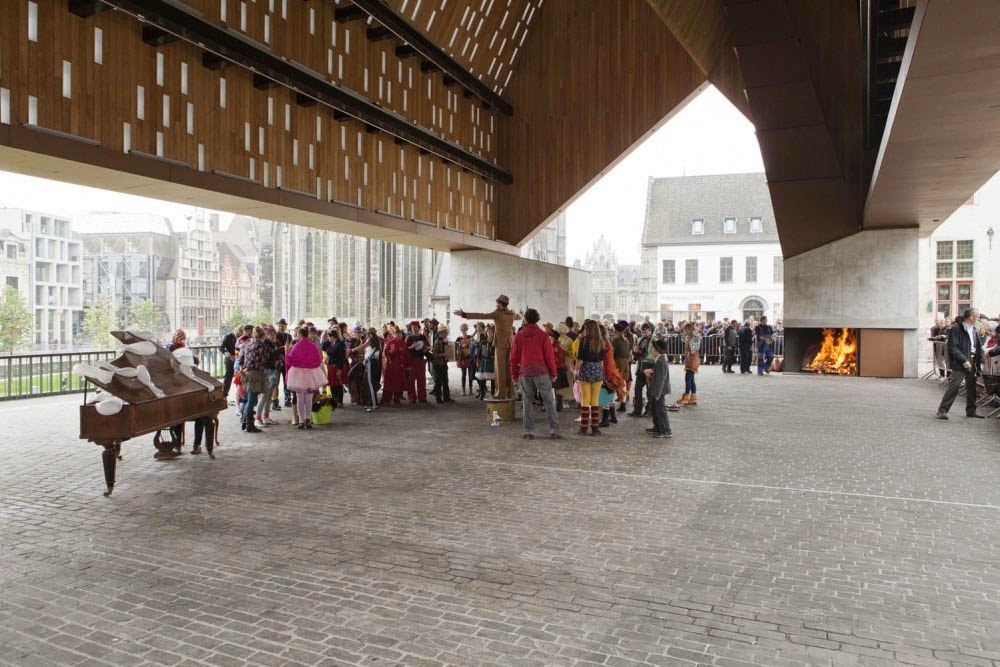 The sixteen years that went by after the original proposal for the porch was disqualified until it was opened to the public were not exempt of controversy between political authorities, citizens, architects and the media. It was not easy for everyone to accept the appearance of an architectural form expressed in such vehemently modern language in a zone that was so laden with historical meaning. Furthermore, the decision to remove cars from the esplanade without offering alternative parking space was not to everyone’s liking.

In any case, the value of the “Stadshal” is much more evident in the street than on paper. Without falling into the traps of imitation or submission, the contemporary nature of the building’s form sets up a respectful yet suggestive dialogue with the historical setting. Indeed, its steep pitched roofs fit in with the neighbouring ones without attempting to be indistinguishable from them. The presence of the “Stadshal” also contributes towards filling in the excessive porosity of the old centre of Ghent. Its volume gives density to a layout where empty spaces had always been intense because there were scarce. Apart from the forms themselves, the intensity of street life is also reinforced by giving priority to the bicycle and public transport as much more appropriate transport systems for a historic city centre.