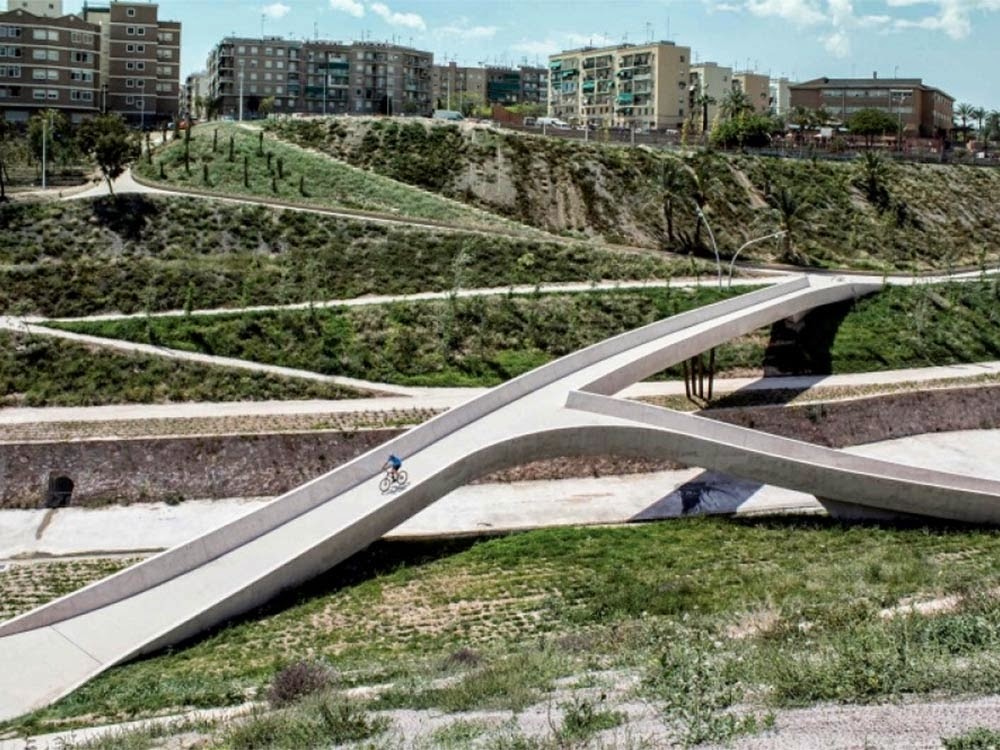 A braided network of paths and footbridges have transformed the bed of the Vinalopó River into a linear park that re-stitches together the neighbourhoods through which it passes, connecting them with natural spaces to the north of the city.

The Vinalopó River is reduced to little more than a trickle when it crosses the city of Elche. Irrigation upstream and very irregular rainfall mean that water only flows in any abundance in autumn, when sudden flooding can occur. This has cut out a riverbed with steep sides, mainly as a result of landslides. The channelling divided the city into two halves, which were only connected by a few bridges that were too far apart. Relegated to the condition of a peripheral rubbish tip, the watercourse became a forsaken pit from which both sides of the city faced away. 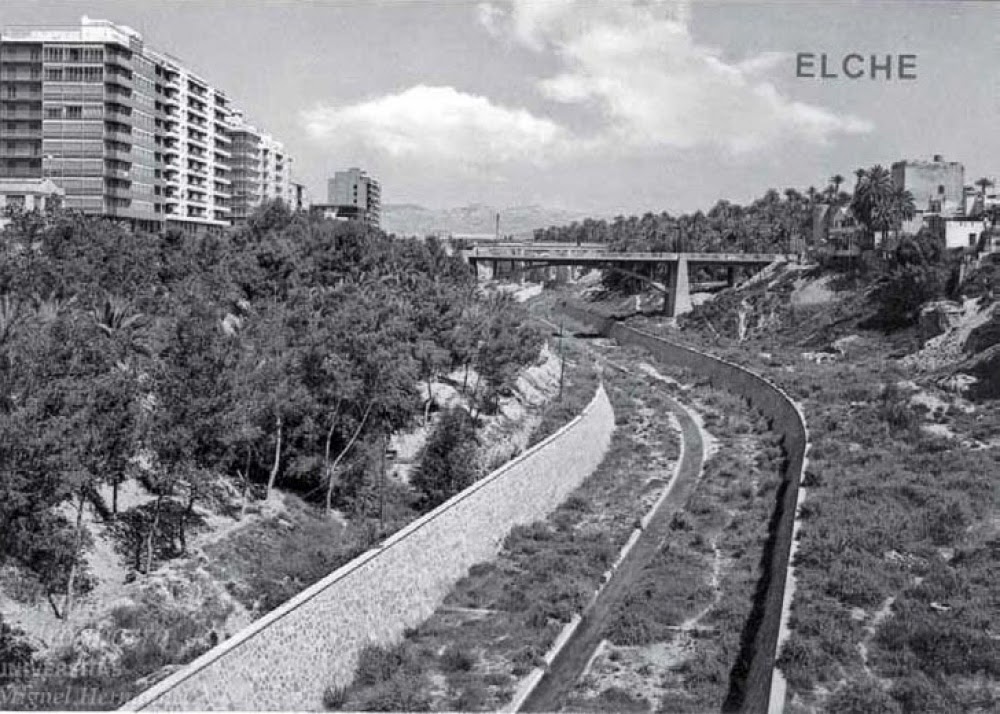 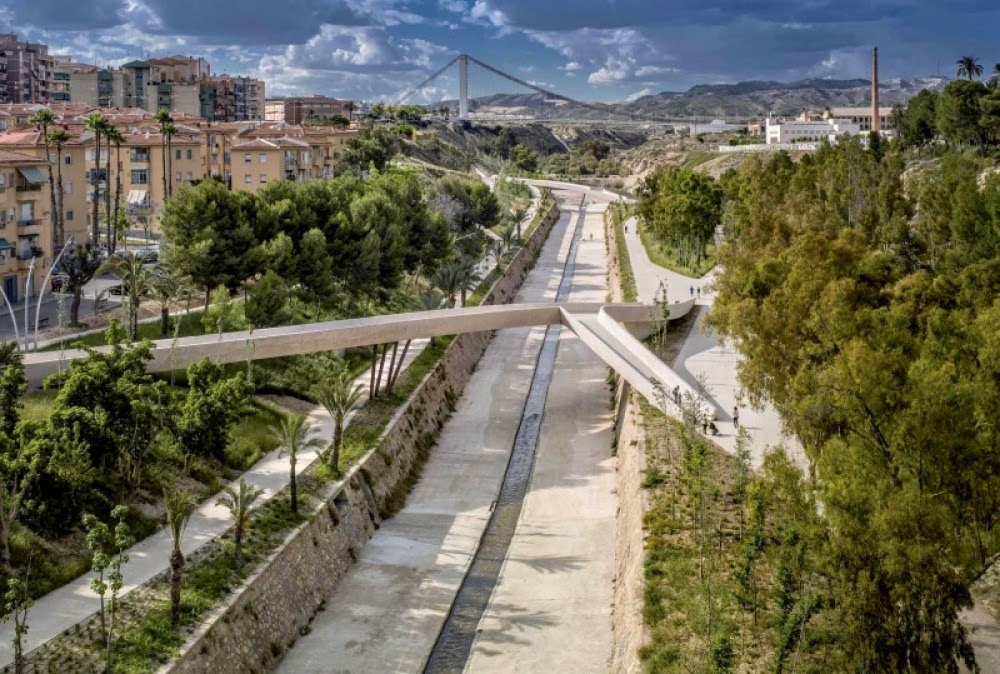 In 2009, the City Council called for entries in a competition to turn the river bed into a three-kilometre linear park with a surface of sixty hectares. Managing the project was complex since it required agreement between the Council with other branches of the administration that were very different in their nature and scope, for example the Xúquer Hydrographic Federation, different ministries of the Government of Valencia, the Sèquia de Marchena Irrigators’ Community and the water company Aigües d’Elx. In the transversal sense, the idea was that the geographic formation, a gully of forty metres deep, should cease to constitute a barrier between the two banks. On the other hand, in the longitudinal sense, the aim was to create a corridor that would offer the inhabitants of Elche the opportunity of moving quickly and easily to the northern end, where they could enjoy some natural settings of very high environmental quality. 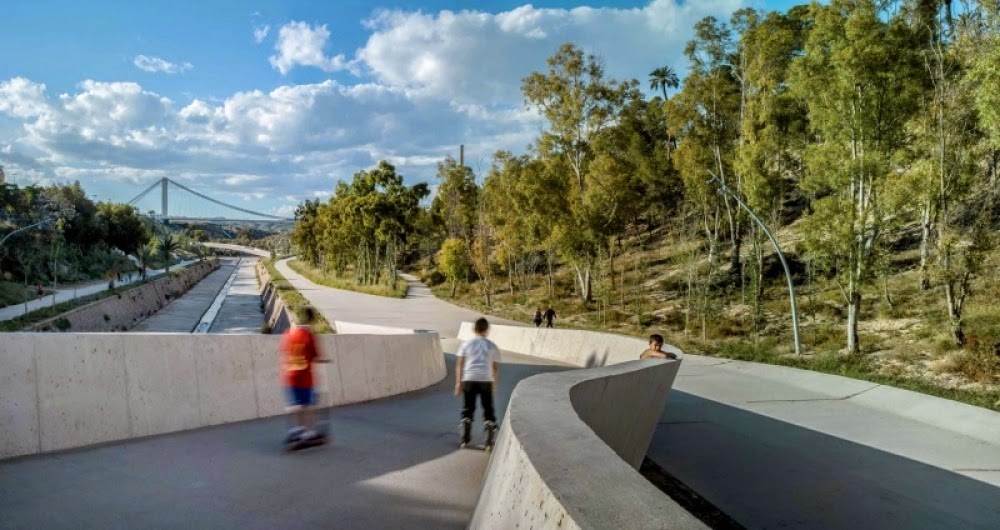 The first phase of the work was completed on the upstream section where the social deterioration of the neighbourhoods and scarcity of bridges made improvement most urgent. A temporary office established next to the river collected data on the areas of movement that were most frequently requested by future users. A network of paths was thus planned and the zone came to be named “El Valle Trenzado” (The Braided Valley) because they criss-cross on both sides of the river, which were also replanted with autochthonous species of vegetation and reinforced against landslides. Before reaching the banks of the watercourse the paths rise up to form two footbridges in a Y-shape. These are constructed in the same concrete with sides that form part of the structure. Resting on clusters of metal pillars which resemble tree trunks, the concrete footbridges give an impression of lightness.